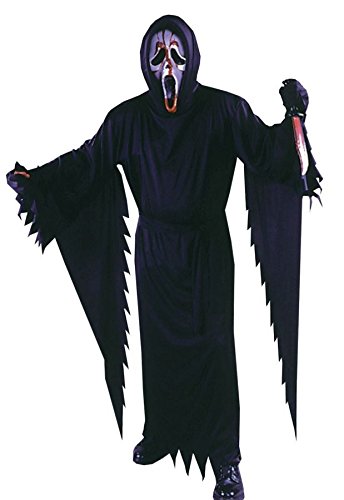 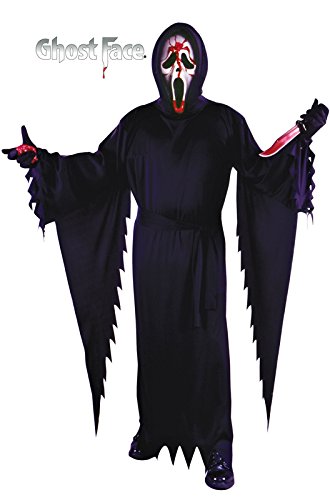 Part No: 1074-N/A-STD. Up to 6' / 200 lbs. Bleeding Ghost Face Adult Costume includes hooded robe, gloves, belt and bleeding mask. Scare the bejesus out the trick or treaters in this gruesome and scary bleeding ghost face adult costume. This horrifying adult costume will sure scare the living daylights of all the Halloween party goers. Gather some of your friends and all of you can dress up as one of the different scary costumes that we have in our scary costume collection. This bleeding ghost face adult costume is fun to wear and will be a hit at any costume party.

Part No: 9974-black-Standard Dress for murder and mayhem this Halloween in our Scream 4 Ghost Face Adult Costume. As the serial killer from the cult classic Scream movies, you will have everyone feeling they are in a real life scary movie. Our Scream Ghost Face Adult Costume includes a full length black hooded robe with draping sleeves and jagged hem, black waist sash belt and the iconic Scream PVC ghost face mask featuring the signature screaming expression. Becoming a pop culture icon after the Motion Picture Horror movie, Ghostface from Scream makes the perfect scary Halloween costume! In the 2011 Scream 4 film, Ghostface returns to kill students of Woodsboro High right as Sidney Prescott returns after ten years for her book tour. Sidney's trio teams up once again to stop the murders, but not before having to learn from a new generation the 'new rules' of surviving horror films. This American slasher film is the fourth installment of the Scream series directed by Wes Craven. New Decade. New Rules. The Ghostface costume still continues to be used to conceal its identity while conducting serial murders and using a voice changer to taunt its targets. This is an officially licensed Scream 4TM movie product. Gloves, toy knife, shoes not included. 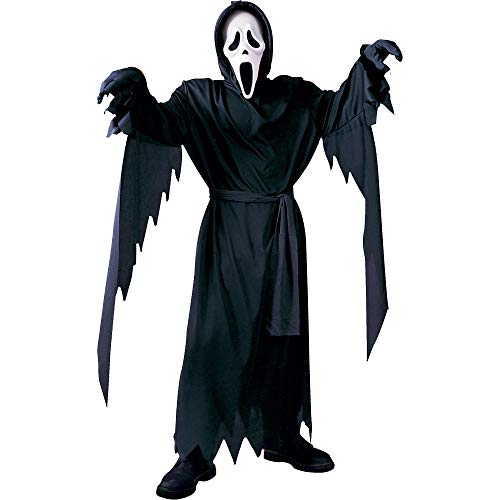 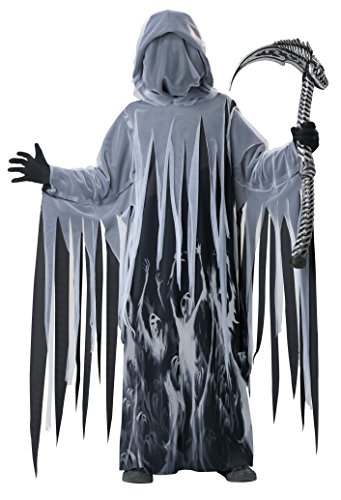 Part No: 00354M This reaper grimly wears his ghostly victims. The Soul Taker comes with ghostly screen printed robe with attached see through face cover and hood. Scythe, gloves and shoes not included. 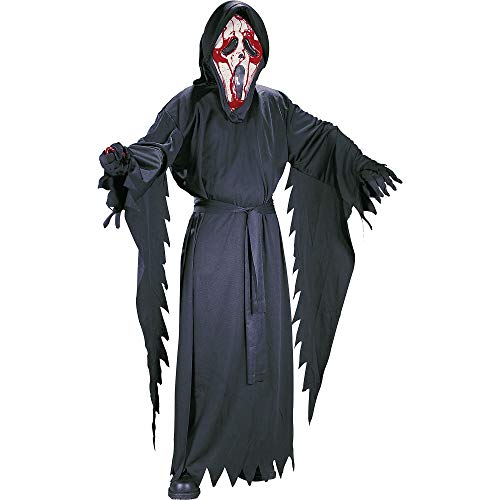 What do kids love most about Halloween? All the candy and turning into their favorite characters! Transform your boy into horror movie killer in our Bleeding Ghostface Scream Halloween costume featuring the signature white mask that looks like it's bleeding. Fake blood is circulated through mask with hidden hand pump. Includes black hooded robe with sawtooth sleeves, matching belt tie and black gloves. Whether you choose to save their costume for future events or pass it on to a friend, you'll always have the memories of your boy having the best Halloween in this officially licensed Dimension Films costume. 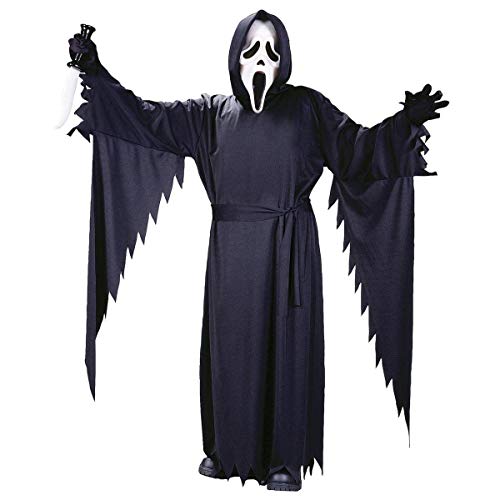 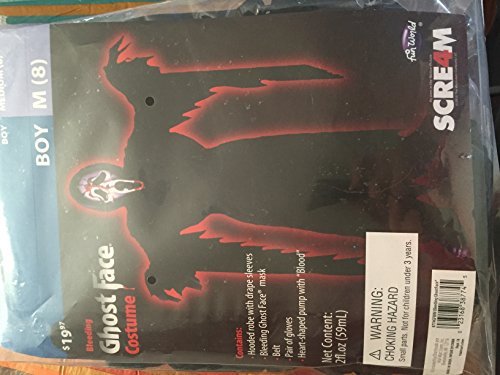 Part No: 4327810487 This kids costume includes hooded robe, belt, gloves, bleeding mask, hand pump and theatrical blood. This Bleeding Ghost Face comes in child sizes Large, Medium. This scary movie ghost costume features a mask that bleeds blood from top to bottom when pumped. This Bleeding Ghost Face is an officially licensed Scream costume. Please note: This item's color may vary due to inherent manufacturing variations or your computer monitor's color settings. The item you receive will be identical or substantially similar to the item pictured in this listing. 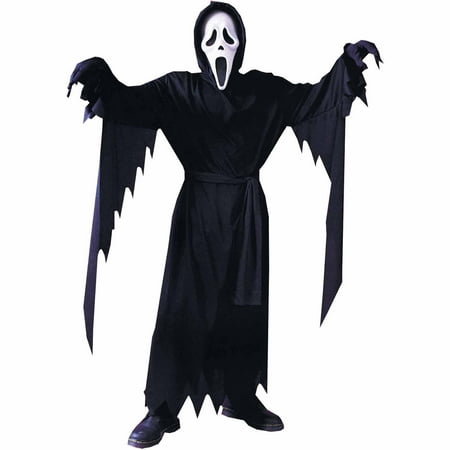 Kids can be the legendary Ghostface this Halloween and spook all of their friends with the Scream Child Costume. It is inspired by the famous slasher film series. It includes the Scream character mask as seen in the movies and a long, black hooded robe to go with it. It also comes with a belt that holds the robe in place. This child Halloween costume can also be used for school plays, character reenactments, parties, parades, family occasions and other holiday productions and festivities. It is easy to maintain so kids can keep using it for years to come. Refer to the size chart to ensure it fits the little one properly. 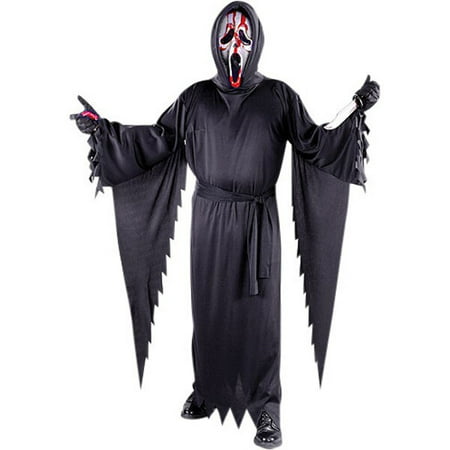 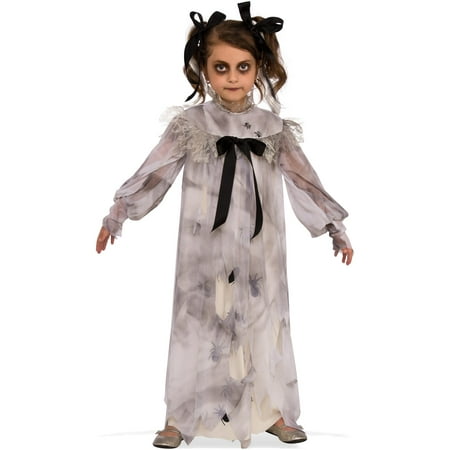 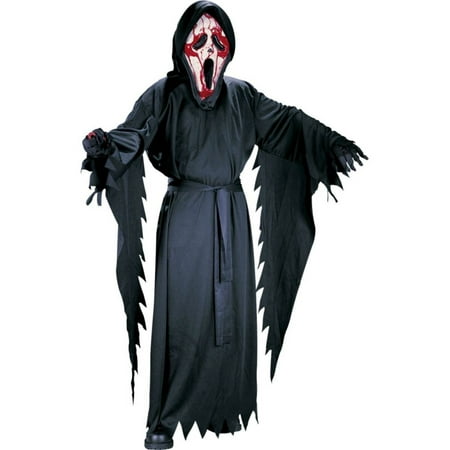 <p>Bring out your child's inner goblin with this scary Bleeding Ghost Face Costume. This spooky piece quickly transforms kids into the famous character from the movie SCREAM. This child Halloween costume includes a bleeding mask, a pump, blood, a black hooded floor-length robe, a belt and black gloves. It comes in child boys' sizes and is made of 100 percent polyester.</p> 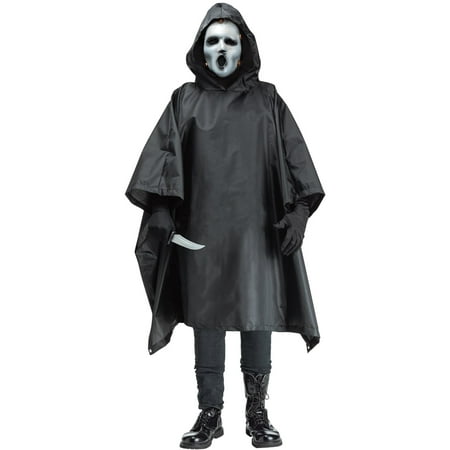 This costume includes a hooded pull over poncho, and mask. Does not include gloves, knife, pants, or shoes. This is an officially licensed MTV Scream costume. 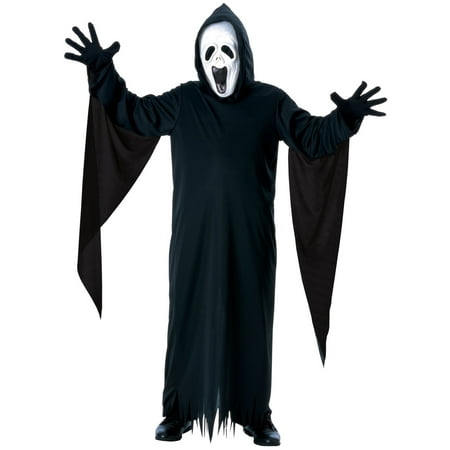 Haunt the neighborhood this Halloween wearing a costume that will send your friends and family running away in fright. Chill the mood with a scary looking outfit and pick up the Screaming Ghost Kids Costume. Pop up when they least it adorned in a ghoulish ensemble that makes you look like the killer from a terrifying horror film. This product features a black hooded robe and white ghost mask for the ultimate Halloween scare. 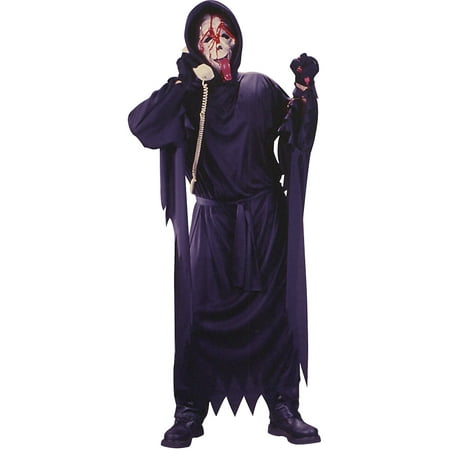 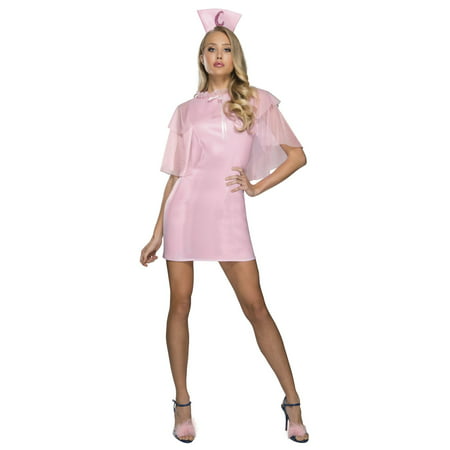 It's fun to be this mean and still look so fabulous! On Halloween, let your inner witch shine through with help from this Chanel Oberlin outfit from the TV show, "Scream Queens." Super-stylish pink dress is accented by an airy capette with a ruffled neckline. The details extend from your head to your toes with the addition of an initialed hat and pouffy shoe clips. 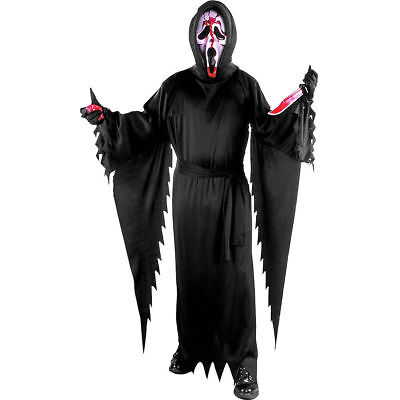 I found this old ghostface mask in my closet... and it bleeds. I think its really cool so I thought I'd review it. Thanks for watching!

Hope you guys enjoyed and please like and subscribe. Be sure to check out my main channel: https://www.youtube.com/channel/UCvM0WFD0E66ttZqZIWBqOoQ